And then there was that one day, when I couldn't get it together, and I just cried all day long.... Seriously, Amy, pull yourself together.

6:30 a.m. does not come easily to me on a Sunday. Well, usually. Today I woke up 10 minutes before my alarm went off, bright and eyed and bushy tailed. I had never gotten up in time to cheer on the OKC Memorial Marathoners before. This year I decided to make it a priority. Misti had talked it up so much to me that I couldn't help but wake up excited.

It was more than I bargained for. Call it lack of sleep, or maybe its my period, I don't know. But when I walked up to the corner of 39th and Shartel, holding my gas station coffee in one hand and Regina in the other, I immediately felt a rush of emotion. Clearly, I was feeding off the energy of the crowd.

"GOOD MORNING! WAY TO GO! THANK YOU FOR RUNNING! KEEP IT UP!" Misti yelled. Mark, her boyfriend, stood next to her clapping and grinning ear to ear. The occasional "WOO!" coming out of him.

"WE'RE SO PROUD OF YOU!" Misti screamed. 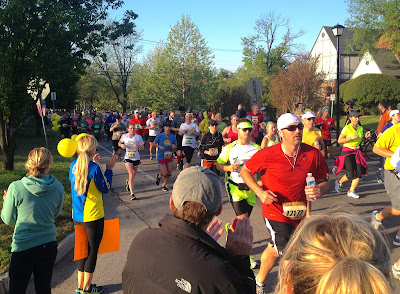 Everyone was clapping. Everyone was woo-ing. Even Regina, the little pup loved it. She ran in circles and howled with the crowd.

We were at mile 6 of the 23 mile race. In the middle of a huge wave of runners, near the lead, was an older man keeping up with pace. He was in a wheel chair. And that's when I lost my shit. Not far behind was a man running his heart out, pushing a reclined wheelchair-a young boy in it. Lost it again.

It's been over 12 hours since then, still haven't fully regained my composure. It was an inspiring morning. 2 hours of clapping, cheering, and crying wore me out.

Thank God, I snuck a nap in afterward. I had a feeling the next thing on the day's agenda would be emotionally exhausting. I had no idea how much of an understatement that would be.

Today was our first table read for our Listen To Your Mother cast. We have been interacting together for weeks now, but our directors asked us to keep our stories a secret until today. I truly wish I could expound on the experience, but to be honest, I don't have it in me tonight.

All I can say is that it was gratifying, validating, emotional, hilarious....inspiring to say the least. I will follow up more on it later this week before the show. But for now, I've really just got to pull it together.

I am so in awe of the raw honesty of these lovely cast-mates, and so excited for this movement that is happening. I love that as a society we are running away from that June Cleaver, perfect on the outside, I have all my stuff together persona....and finally being honest.

This show is going to be great. Really, really, great.

Misti and I headed to Mamasita's for a nightcap and some wind down conversation. More laughter, more tears, (at this point I'm just feeling ridiculous). Her friendship has become so dear to me, and this week is her last one at the salon. I'm so proud of her and so excited for the direction her life is heading, but can't help but to feel a little selfish and wishing she would stay with me.

As for me, I'm putting myself to bed. My eyes hurt from tears, and my abs hurt from laughter. I'm going to sleep SO good tonight.