Humanity- proving once again that superheroes do exist.

"Only two people died, I mean I know it's bad, but only two deaths? People are kind of overreacting."
-said my professor

What? Excuse me? You didn't just say that did you? Just as I thought I had heard the worst of it, a student in class responded-

"Exactly. Stuff like this happens all the time all over the world. Just not here in America, that's why people are freaking out, we're just not used to it."

What about the dozens who were injured, who lost limbs? What about the bystanders who looked around at pools of blood, screaming children, and witnessed tragedy at the highest degree? Innocent people struck by disaster.

I wanted to yell at them. I wanted to ask- "So how many have to die before its 'bad'?" Or, "Would you consider it 'bad' if it had been your child that was killed, or your father who had lost both of his legs?"

They weren't wrong. Stuff like this does happen. It happens all the time. Seemingly more and more frequent. So what do we do with that? Allow ourselves to become numb, or get "used to it"? That way next time it happens it won't hurt so much?

I don't think so. I have a better idea. Let's do the opposite.

More important than not becoming numb to the violence, LET US NOT BECOME NUMB TO THE COMPASSION.

As a result of today's tragedy, 2 died, dozens were injured, and HUNDREDS maybe THOUSANDS dropped everything to help. Every video, every photograph, showed crowds racing to care for the needy. The fear and distress didn't stop a single person from jumping in. 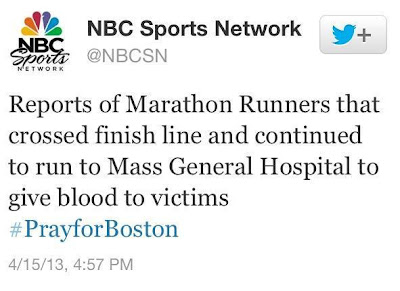 Compassion-what a beautiful and incredible attribute of life. What a heroic statement it is to show compassion! And without suffering, it would not exist.

The police officers, the firemen, the runners, the bystanders, I admire them all. They all make me so proud to be a part of the human race. I refuse to become numb, because the moment you shut out the bad stuff you automatically overlook the good that follows.

Evil showed up today, in a big way.
Compassion came in right behind it, and crushed it to pieces.

Loss and possession, death and life are one. There falls no shadow where there shines no sun
-Hilaire Belloc