It's the memories of coming together.

I can't count the number of times in my childhood I woke up in the bathtub next to my sister, with every couch cushion and pillow our house could offer, piled on top of us...or how many times we sat in the hallway with our mattress strategically propped up on the wall, hovering over our heads. "Doppler Mom" (as she has become known) was the queen of weather over-preparation. A few months ago, as I was leaving Whole Foods, I noticed they were selling pre-made rubbermaid tubs of "Tornado Survival Kits." I laughed as I looked at them- thinking they really should have consulted my mother because there were several things she could inform them were missing.

Growing up in Duncan, Oklahoma (located in an area known as "Tornado Alley"), Tornadoes are not recognized as a major natural disaster, or an occasional feared phenomenon...it was a season. Tornado Season. A span of time each year when tornadoes, and all the activities included, are just a pastime. From April til early June- sirens, basements, flashlights, mattresses as tents, are just a part of everyday life.

Eventually, there were things I grew to love about Tornado Season. There were 3 families on our street we were very close to. And one of those families had a storm shelter that, for me, as a child, was what dreams were made of. A few times each season, (on the nights we had time to prepare and weren't stuck in the cold porcelain tub under cotton stuffing), my family and all of our friends would cram into this shelter for a night of game playing and meteorologist critiquing. (Everyone except my claustrophobic father, who would indefinitely be sitting outside on the porch refusing to come down until he could see the 'nader coming down the street). We made a lot of memories in that shelter.

I remember being scared. Mostly because my mother was a ball of panic. But the memory of the fear isn't what sticks with me. Its the memories of coming together.

As I grew up, I began traveling to other states, making friends in other places. Inevitably, when people found out I was from Oklahoma, some of our first conversations usually went something like- "Are there still teepees there?"-"You people sure are serious about college football!"- and- "Aren't you afraid of the tornadoes??".

Generally I laughed them off- "We have houses just like you. Of course we are, it's not a joking matter. Its not too scary, grab a cushion and a snack and hop in a closet."

Native Okies have a tendency to become a little 'hum-drum' about tornadoes. Most likely due to our over-panicked mothers and occasionally dramatic weathermen. After all, the majority of the time when clouds rotate and "vortex's" show up on the weather map- nothing happens. We natives are so completely used to it that when the sirens were going off Sunday most of my friends were headed outside to cheer on the paraders at OKC's Pride and I was laying in bed trying to nap, wishing the sirens would be quiet so I could sleep. After all, the tornadoes were 5 miles from me, I was less than worried. I mean its tornado season, this was normal. 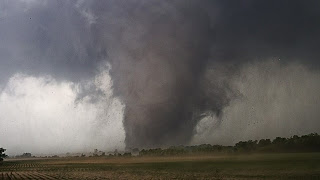 But last weekend was anything from normal. Sunday evening to Monday afternoon, monstrous tornadoes ripped apart communities and neighborhoods with a force that is rarely seen. It was horrific, devastating, and heart breaking. It was not the normal. Red Cross, FEMA, and the National Guard rushed in to help as adults and children alike were being pulled from the rubble. Our local newscasters who are so used to reporting on tornadoes and torn up fields, were breaking down in tears on camera.

It has been so interesting to watch the difference in reporting between local news and national news. National broadcasts have been flooded with opinions about what Oklahomans should and shouldn't do, where we should have shelters, where we should build homes. One newscaster even said "Parents shouldn't send their children to school on days there might be a tornado." (My mom informed me of this through a series of irritated text messages concerning the 'stupid national news people'). But really, these people have no idea what they're talking about. Basically that means no one would go to school past february.

I have been so impressed with our local news stations. They're reports have been so heartfelt. As we all watched Lance West break down into tears on the scene in Moore, you couldn't help but feel the connection to the victims. Okies have such an incredible way of connecting in times of distress. It happened after the bombing, it happened after the May 3rd tornado in '99, and it is happening now. Oklahomans are resilient, and no matter how hard we get beat down, nothing can keep us from getting back up. Not even the most powerful tornado in American history.

It only took 24 hours for Red Cross to announce they were no longer taking In Kind donations- they had received more than enough bottled water and other goods.

I don't know how many interviews I have watched of people who have lost everything and they stand with a smile on their face- grateful to be alive, and ready to help their neighbors dig through piles of what used to be their homes. Time and time again I hear people who have not two pennies to rub together and only the clothes on their body, and yet they are spending hours in the rain helping a friend. We are such a community in this state, and I am so blessed to be a part of it.

"Why would anyone want to live in that state?" the rest of the nation asks... 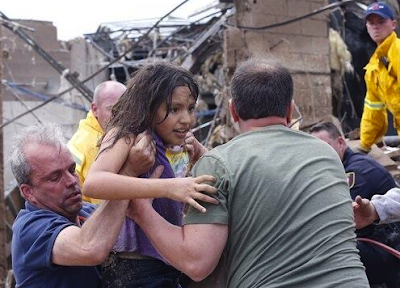 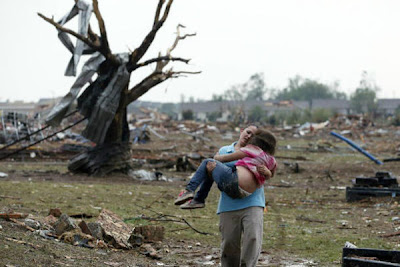 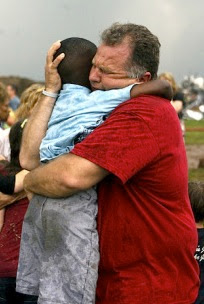 A teacher finding his student after the tornado

If you are looking for a way to help or would like to donate, please make your first option a local charity. Infant Crisis Services is an incredible local organization, you can be sure donating to them will directly impact lives of infants.
Posted by Amy Herrington at 3:56 PM