The Bloom Said It All

This summer I am working on getting Justin and I's story down on paper, not chronologically, just the random moments through the years that make us, Us. Every now and then I will post some of "Our Story" here. This is my first one.


It was pretty much like every other Tuesday night. I was home, working on dinner, and waiting for my man to get home from work. The thought that it was any sort of special day on the calendar had completely escaped from my mind. I was too concerned with not burning our dinner to even consider what the rest of the night might hold.

Tomato soup and caesar salad was on the menu. That's right, i was trying not to burn soup. Give me a break, being a domesticated "housewife" was still a relatively new idea to me.

He came through the door with a grin on his face that screamed, "I am so proud of myself". His hands seemed to be clasped behind his back, and I couldn't help but feel curious. As if his posture and facial expression wasn't enough to tell me something was up, my welcome home hug that I had grown accustomed to was missing. It was then that I realized his hands weren't just clasped, there was something in them!

"What is going on?" I kept thinking. This moment probably lasted a total of 20 seconds, but I was so confused and curious that I felt like I had been standing there, soup spoon in hand, taking it all in for at least 5 minutes.

Weeks ago we had been watching television, when the cheesiest most ridiculous commercial came on for Walgreens. They were advertising "The PERFECT gift for your Valentine." I had laughed at the commercial as a perfectly, perfect couple exchanged this most perfect gift. They had held hands, and laughed, probably danced at some point, and I'm sure there were candles involved.

I have never celebrated Valentine's Day, I find it silly. In my cynical head, I thought to myself, "I can't believe people buy into such a consumer driven holiday. Someone is actually going to watch this commercial, hop in the car, and go get their partner A BLOOMING EXPRESSION..."

That's right, the item for sale in the ad was called A BLOOMING EXPRESSION. I giggled to myself thinking that sounded like a nickname I'd use when talking in code about my vagina. I mean really people, is a fake battery operated flower that opens up to reveal a generalized statement about the way you feel going to be THE PERFECT gift for your Valentine? Did people really think that offering up this plastic bloom would generate a happily ever after which included dancing in the candle light?

"THAT'S EXACTLY WHAT I WANT FOR VALENTINE'S DAY!" I exclaimed, in what I felt like was the ideal sarcastic tone.

Apparently, I'm not the best at communicating through sarcasm. APPARENTLY, what I thought was the ideal sarcastic tone, actually came across as flawlessly genuine.

So, here I stood, soup spoon in hand, dying to know what Justin had so proudly come home with on this Tuesday night. As he brought his hands around front, from behind his back, he pressed a button on the bottom of the plastic vase and the cloth petals of my most perfect present opened up to reveal a lovely, but generic, statement.

I immediately died laughing. My hilarious boyfriend had remembered the oh-so-funny joke I had made weeks ago. I don't remember exactly what I said immediately after being given my Blooming Expression. But whatever it was, it did not sit very well with him. His facial expression automatically changed from the 'I'm so proud of myself face,' to the 'Uh oh, this was not the reaction I expected face.'

We both paused. Me, mid laughter. Him, confused face.

"This was a joke right??"
"You said this was what you wanted!!"
"Oh my god, I was being sarcastic..."
"Oh no...You sounded so genuine, I thought you were serious! I have to call Tyler and tell him not to give his to Emily, I convinced him to get her one because you had wanted one so badly..."

I stopped giggling, and his face went from confused to embarrassed in an instant. I suddenly realized that Justin had been excited to surprise me with "EXACTLY WHAT I WANTED FOR VALENTINE'S DAY," for at least the last 6 weeks. He later informed me that he had even called the Walgreens by his office to have them set aside the exact expression he wanted on hold.

Disappointment clouded his face and he went to set my cloth flower on the table, he looked completely defeated.

I looked over at my now BLOOMED expression, and saw that the inside of my flower said, "You are one of life's best gifts." I looked at him and thought to myself, 'Ditto.'

I hugged my boyfriend, gave him a kiss, and thanked him over and over for my PERFECT GIFT. He gave me a look that said 'Don't patronize me.' I smiled and assured him, that I loved it. And I did, I really loved it. Not because it was the perfect gift, or because I had always dreamed of a cloth flower in a plastic vase, but because it was given to me out of pure and perfect thoughtfulness.

I set the vase in the middle of the table, next to a burning candle, and we sat down to enjoy our caesar salad and tomato soup that had now burned on the stove during this whole process. We enjoyed our simple dinner, around our small table, in front of our burning candle, and a cloth flower that said it all.....

"You are one of life's best gifts." 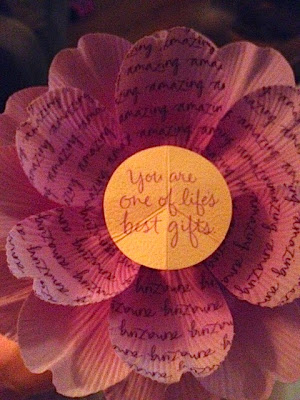