I grew up in a Nick at Nite home. I often joke about how I didn't experience a television show that was being currently produced and aired until at least Middle School. While that may be a tad exaggerated, the MAJORITY of what I saw on TV as a child were early family sitcoms.... I Dream of Jeannie, Bewitched, The Brady Bunch, Leave it to Beaver.... the wholesome "classics" you might say. But, while they may have showcased "wholesome" family values, there was something else they most definitely did not showcase- a strong and fearless female lead character.

Lucy was fearless. She was fearless in her pursuit to break the mold that society far too often put on women, and still puts on them today. Women work hard to break free from those expectations today, but Lucy had to work even harder in the 1950s. That decade marked a time when the women were begrudgingly forced out of their jobs to make room for the returning soldiers, and were told there was really only one place they belonged-- in the home. And so, when it came to television, art imitated life, (or maybe life was imitating art).

In any case, Lucy was not the stereotypical housewife. She was not the supporting actress. She did not fade into the background. Her fearlessness, ambition, and pure hilarity set her apart from all others. As I got older, I developed a profound respect and admiration for the woman. I started collecting her biographies and reading her interviews. I got to visit the original set of I Love Lucy at Universal Studios. And the day I got to take a picture with her star on Hollywood Blvd...let's just say there were some teary eyes on this girl.

So, in honor of her birthday...

The top 5 reasons why Lucille Ball will forever be my hero:

“Ability is of little account without opportunity,” she said. When the studio she worked for wouldn't let her produce the show the way that SHE wanted, she created her own studio! She was the FIRST WOMAN to run a major television production company, DesiLu Productions, (which she co-owned with her husband.) Years later, after the two divorced, Lucille bought out Desi's share in the company, becoming the sole owner. She later sold that company for $17 million (a lot of money in 1967), and it is now known as Paramount Pictures.

She was a red head. By choice. On purpose. In her day, there were two options for women on-screen, a flirty blonde or a sultry brunette. Lucy colored her hair red, telling people that her desire was not to fit in, but to stand out.

She was a strong and independent woman, yet she adored her husband and was his biggest cheerleader in his career. She had to fight to get him on the show. Network producers didn't approve of their multi-ethnic marriage, and thought Desi was "too ethnic" for television. In true Lucy fashion, she wouldn't take no for an answer and refused to do the show without him. Of couse, she got her way. She divorced him after 20 years of marriage, because he was not a faithful husband, and because she knew she deserved better than that. But she always said that he was the love of her life, and that she loved and adored him until the day that he died. I've got mad respect for a woman that knows her worth and knows when to leave, but also doesn't hold a grudge.

She was 40 years old when she started I Love Lucy. Did you hear that?...FORTY...WHEN SHE STARTED. And she was America's #1 star on television with over 16 million weekly viewers. That may not seem so crazy to you, but when you consider that less than 20% of all female actresses we see on screen today are over 40, it gives you a little more perspective on what an accomplishment that was...and proves that it's never too late in life to pursue your dreams.

She was hilarious. Her comedy was relentless, and knew no bounds. As a young kiddo, I of course wasn't aware of the mountain of accomplishments she was standing on. I didn't know that she, (along with Phyllis Diller and Carol Burnett), were paving the way for funny women today. But, I knew she was funny. And I knew that she wasn't afraid to look RIDICULOUS.

Here's to you, Lucy... Inspiring women to go after what they want, to challenge the status quo, to enjoy life to the fullest, (and to be brave enough to act ridiculous while doing so.) 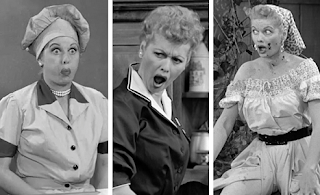 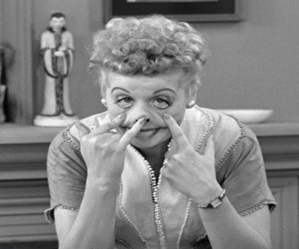 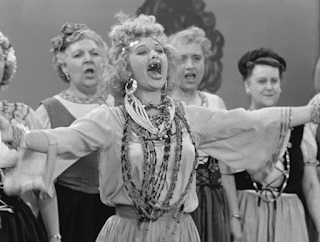